Accueil Résultats Well it took us four days but we all finally win in...
PARTAGER
Facebook
Twitter

LUSKVILLE (August 4th, 2008) – It was a marathon for sure but nobody gave up and in the end it all got done, and champions where crowned in all class’s for the entire weekend of the 29th annual Bracket Bonanza goes in the record books. And yes it was a weekend of records, with the largest car count in the history of the event, the longest time to complete, the fastest ever e.t. as Jessie Lahaise from Montreal set that with a 4:55 charge all weekend long in competition. We even had to shut things down at one point of the weekend to remove one of the largest snapping turtles I have ever seen, after he wandered out on the track, yes it was a long ordeal but everyone won in the end.

Indications of a huge turnout where evident as early as Thursday as the pits began to over flow that early in the weekend, and by Friday teams where using the camping area to park there race cars in in order to have room to move around. Friday night kicked off with a normal gamblers race which was won by Russell Adams followed by a high rollers which was won by Terry Miron. Gerry Otley took home the new title of Ottawa’s Fastest Street Car as he won the final of a carry over from a previous weekend rainout. Even though the weather man called for rain none happened at the track although it was clearly seen every where around us. Again Saturday was suppose to be a wet day, so most where expecting no racing, NOT as everyone was up and at things by 9:00 am and even though we had to spend many times drying and cleaning by 10:00 pm Saturday Night the first Wally of the weekend was handed out to Darren Frasso with is first ever win at the bracket. Daryl Jensen was the semi pro winner, Rob Graveline was the bike winner and Kyle Reynolds was the Jr. Winner.

Again Sunday the weather man called for showers and he wasn’t wrong as a number of times things had to be shut down to dry the track before things could resume. And as we reached the point of no return at about 6:00 pm it was decided that enough was enough and we would move the remaining things to Monday for completion. Again the weather was not calling for great stuff but we felt that was our best move and it worked out well, as the sun came out, the staff completed the drying and things got back on track at about 10:00 am. After about 3 hours more of racing more champions where crowned and once again more first time ever’s occurred, Becky Ray won her first ever Wally and the big payout that goes with it as she defeat Randy Urslak in the finals. Semi Pro was the takings of Pat Kohl as he defeated Joe Doyle in the finals, Jamie Radbourne won the sled bike class and Kenyon Payne was the Jr. winner.

So the 29th addition goes in the record books as being the longest ever, the first ever four day event, the longest ever bar-b-que as it too was dragged out because of eliminations running into Saturday night. new winners in almost all class’s and many happy faces with the new payout structure spreading the money around. Yes the only down side to the event was the spectator turnout which was the only thing that did not set a record and here we know the weather played a huge part. So with the 29th out of the way plans are under way for the 30th annual which will se a special RACE OF CHAMPIONS of all previous Bracket Bonanza Winners in Super Pro being invited for a special race with special prizes including a special 30th annual Bracket Bonanza Race of Champions Leather Jacket, we will have more on this in the near future. 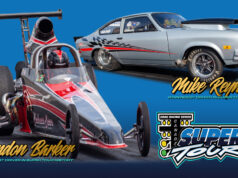 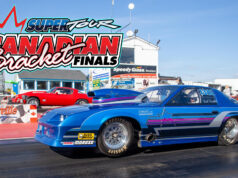 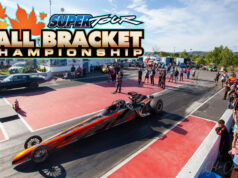 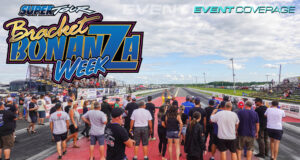